Research shows how intimately the heart is involved in the processes and proper functioning of the human body. Therefore, even the nonscientist might easily accept the premise that certain aspects of heart rhythms can be indicators of general health. Now, a recent study suggests that personality can be a useful barometer as well.

The study, Personality and Heart Rate Variability: Exploring Pathways from Personality to Cardiac Coherence and Health, hypothesized that “personality traits will be significantly correlated with specific measures of HRV.” (HRV, or heart rate variability is the variation in the time interval between heartbeats.)

Among others, the personality character traits

of self-directedness, cooperativeness and self-transcendence – the experience of spiritual ideas – were utilized in the study as indicators of autonomic nervous system (ANS) balance. The ANS, which controls and regulates our internal organs, is a key measure of health: When the branches of the ANS are properly balanced, we are more likely to be in good health.

Although the researchers gathered what most observers may only see as highly technical data such as frequency levels of ANS activity relative to certain character traits, their ulterior purposes can be understood in simpler terms.

One of the project’s primary goals was to add to the scientific community’s body of knowledge about how autonomic nervous system regulation contributes to “the development and maintenance of health and disease.”

Moreover, the researchers observe, “We expect that a better understanding of HRV in relation to individual differences in personality and lifestyle choices will contribute to improved medical diagnosis and treatment.”

Irrespective of one’s personality, it has long been known at the HeartMath Institute that virtually anyone is capable of improving and maintaining his or her mental, emotional and physical health through self-regulation.

Applying self-regulation, one aspect of the character trait of self-directedness, to our emotions has been shown scientifically to help promote health and well-being. Most notably, HeartMath has demonstrated, self-regulation of emotions by replacing negative emotions such as anger and anxiety with positive ones such as appreciation and compassion can vastly improve health, performance and relationships. Thousands of HeartMath study participants and hundreds of thousands of people worldwide who have self-regulated their emotions by practicing coherence- and resilience-building techniques have achieved these results.

The participants in the study, conducted by professors Ada H. Zohar and C. Robert Cloninger, M.D, were selected from 271 adult male and female volunteers from a community in Israel. Each person completed an extensive questionnaire designed to provide a comprehensive personality evaluation, and 118 of them agreed to participate in the HRV study. They wore devices that recorded their heart rate variability for 24 hours, and the HRV recordings were sent for analysis to the HeartMath Institute, a widely recognized authority on HRV.

Zohar, Cloninger and HeartMath Institute Director of Research Rollin McCraty, Ph.D. authored the written study, which was published in December 2013.

The hypothesis that personality traits would be correlated with HRV measures was borne out in the results, the authors state in the published work, but they caution that the work is preliminary and future work should be undertaken to replicate and extend their findings.

Nevertheless, their work can be viewed through the prism of an array of studies over the last several decades. For example, the published work observes, “Personality and heart rate variability (HRV) are each strong predictors of well-being, particularly cardiac health and longevity.”

A variety of findings from previous research helped provide a foundation for this study, including the following: 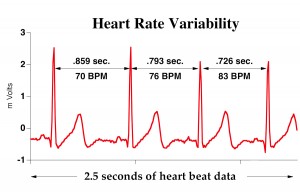 Why is heart rate variability, which was central to this study and a primary area of study at HMI, important on a personal level? Researchers with HeartMath and other entities have established that the amount of variation in the time interval between heartbeats is indicative of health and well-being.

This has been demonstrated, for instance, by assessing the amount of heart rate variability in many thousands of participants and correlating it with a wide range of mental, emotional and physical health indicators. The rule of thumb is, the greater the heart rate variability, the healthier the individual.

Thus, the researchers state in a final note, “The regulation of cardiorespiratory functioning through the autonomic nervous system may be an important way by which personality jointly influences the physical, mental, and social aspects of health and well-being.”

Click here to view the abstract or download a PDF of the complete text of Personality and Heart Rate Variability: Exploring Pathways from Personality to Cardiac Coherence and Health.

Do you feel the regulation of cardiorespiratory functioning through the autonomic nervous system may be an important way by which personality jointly influences the physical, mental, and social aspects of health and well-being?