The Heart Lock-In® Technique, one of HeartMath’s earliest tools, has helped individuals and groups increase heart-rhythm coherence for many years. Now a study* has validated the tool’s effect on synchronization between the heart and geomagnetic activity, which is significant because this synchronization is associated with better health.

The Heart Lock-In, introduced in 1992, helps to increase coherence in an individual’s heart rhythms. It has been shown to increase the synchronization of heart rhythms between participants in a group setting as well.

Participating in the study, whose researchers included HeartMath Institute’s Director of Research Rollin McCraty and scientist Mike Atkinson, were 20 medical students at Lithuanian University of Health Sciences. The students were instructed to wear heart rate variability (HRV) recorders 24 hours a day each day of the 14-day study, except for a short period after waking in the morning.

HRV, the measurement of the time intervals between adjacent pairs of heartbeats, or simply the beat-to-beat changes in heart rate, reflects autonomic nervous system (ANS) dynamics. Among other uses, it can help assess a subject’s heart-rhythm coherence level. The published study explains that "higher levels of HRV are associated with resiliency, capacity to self-regulate and to adapt to changing demands," and lower levels of HRV "indicate pathology, chronic stress, or insufficient functioning in regulatory systems … and is associated with all-cause mortality."

The students’ recorders gathered HRV data before, during and after they participated in a group Heart Lock-In for 15 minutes. "The Heart Lock-In Technique," the researchers explained, "focuses on building the capacity to sustain heartfelt positive emotions. The technique is generally practiced for five to fifteen minutes at a time, although longer sessions may be used as well."

A week into the study, the students participated in the Heart Lock-In. This was so HRV coherence data gathered during the Heart Lock-In could be compared to data from the days before and after the exercise. Additionally, all of the data was studied to assess the synchronization between the participants’ HRV and magnetic field activity. 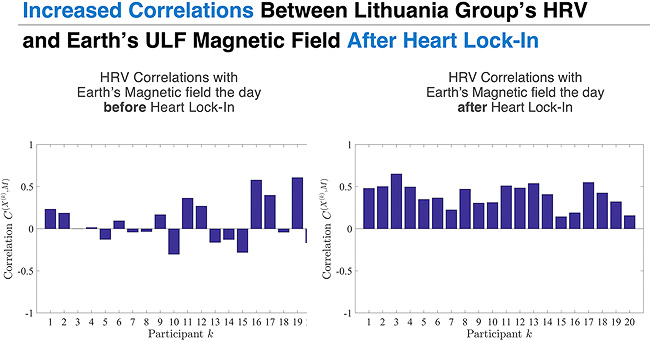 “Of all the physiological systems studied, the rhythms produced by the brain and heart are most affected by changes in geomagnetic conditions.

“It has also been proposed that when one is in a state called physiological or HRV coherence that one is more likely to be coupled to and therefore synchronized to the Earth’s magnetic fields.”

"The results of the conducted study," the authors wrote, "indicate that the applied Heart Lock-In Technique has a positive impact on the synchronization between human heart rate variability and the earth’s magnetic field. Thus, such … techniques are shown to be valuable not only psychologically (in sustaining positive emotions), but also physiologically, since high synchronization between heart rate variability and geomagnetic activity has been associated with better health conditions. Further study of these effects using different computational and experimental techniques are a definite objective of future research."

The researchers explained in the published study that another significant aspect of this study was the successful utilization of a newly developed and validated analysis approach for improving assessment of physiological synchronization and identifying participants’ response patterns. "This allowed us to identify specific patterns of synchronization between heart rate variability and local magnetic field data and assess potential effects of participants being in a state of HRV coherence on synchronization in a group of people located in Lithuania."

* The study, The Influence of Heart Coherence on Synchronization Between Human Heart Rate Variability and Geomagnetic Activity, was published in the December 2018 issue of the Journal of Complexity in Health Sciences. Click the link to read the entire study. It includes the steps of the Heart Lock-In Technique, so you can start practicing it yourself and with a group – family, friends, colleagues, etc.