In conjunction with the continuing intuition research at the HeartMath Institute, HMI Research Center Director Rollin McCraty said recently the findings of a new study further documents the ability of humans to experience intuition, also known as the pre-stimulus response.

The study, Stability of Pre-Stimulus Intuition Response: A Repeated Measures Study Using Electrophysical Instrumentation, utilized the experimental Roulette Protocol, a computer-controlled gambling experiment designed by McCraty and HMI’s Mike Atkinson. Thirteen people participated in multiple gambling sessions over a two-month period for this research, which was conducted at the Research Center in the fall and winter of 2006 and analyzed in spring 2010.

“The results of the analysis of all participants across all sessions and trials are strong and provide compelling evidence of nonlocal intuition,” McCraty wrote in a report on the study, which he conducted along with Atkinson and HMI’s Jackie Waterman.

“The significant differences between the win and loss response in the aggregated physiological data during both pre-stimulus segments appear valid and robust, as confirmed by the random permutation analysis, which, is a conservative statistical procedure,” the report notes.

The Protocol and Its Results

“Participants were told that they were participating in a gambling experiment and they were encouraged to win as much as possible over the course of 26 trials,” McCraty said.

For each trial, electrodes were attached to the pads of participants’ index and second fingers of their nondominant hands so skin conductance levels could be measured and electrocardiographic information was recorded from electrodes placed on the chest so heart-rate variability/HRV (the beat-to-beat changes in heart rate), could be recorded. They chose bet amounts and then selected either red or black for each impending spin of the roulette wheel on a computer screen. The resulting color for each spin was compared to participants’ color choices.

“The heart-rhythm measures (HRV) were especially successful in detecting pre-stimulus responses in the pre-bet and post-bet segments, both of which occur prior to knowing the future outcome,” McCraty wrote in a grant report for the study. “In the post-bet segment, the difference in the win/loss response was evident some 12-14 seconds before the result red or black was made known to the participant.”

“We also found that a greater heart-rate deceleration was predictive of loosing trials in the prebet segment, and the divergence in the win/loss curve begins almost immediately after starting the trials, which on average occurs around 18 seconds prior to knowing the future outcome.”

McCraty said the greater heart rate decelerations predicting negative future outcomes were consistent with previous pre-stimulus response findings. “While this is substantially earlier than found in previous research – typically 4 to 7 seconds, these results indicate that the time of the pre-stimulus response is likely limited by the experimental protocol. How much earlier the body can respond to a future (and known) event will require further investigation.” 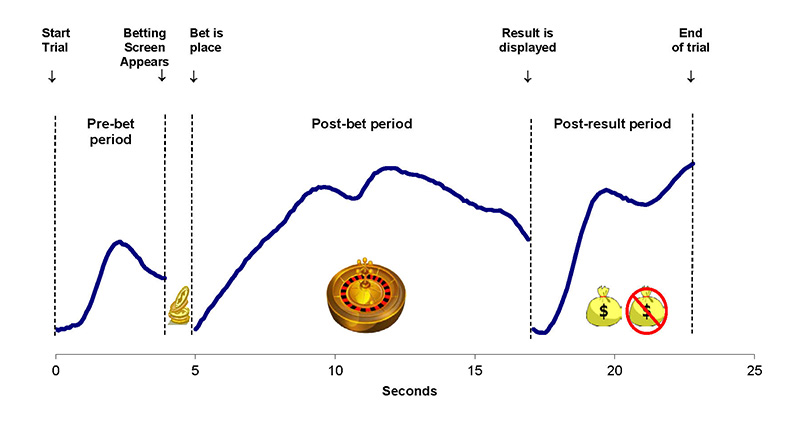 The experimental Roulette Protocol utilized a gambling paradigm – roulette – in which the participants are required to choose a bet amount and then choose (bet on) either red or black. The choice of red or black is then compared to the post trial result – the randomly determined future outcome.

Betting by the Moon 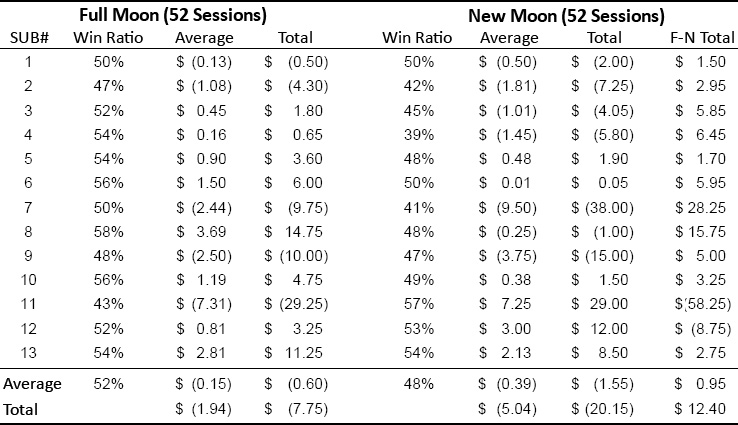 The table above shows results for each of the 13 participants (SUB#), his or her win ratio and the average dollars and cents won or (lost) during full-moon versus new-moon trials.

Why Researchers Used the Roulette Protocol

A number of protocols have been employed over the more than a half century that scientists have been conducting nonlocal communication research. McCraty said HMI wanted to eliminate some of the known flaws in other methods used for this type of research, so he and Atkinson developed the Roulette Protocol.

In the end, he said, they were pleased with the choice and believed it proved more effective than other methods, citing, for example, the use of emotional photos.

“It solves several protocol issues associated with the emotional pictures protocols,” he said. “Not everyone responds the same way to the same picture, and you can only show so many negative photos to (people) before they become desensitized, and strong negative photos cannot be used with some populations such as children.”

In short, McCraty wrote of this research method, “The results indicate that the new Roulette Protocol provides an effective, objective measure for detecting nonlocal intuition.”

Researchers with the HeartMath Institute have, for more than a decade studied the phenomenon of intuition, which they describe as “a process by which information, knowledge or feeling, normally outside the range of cognitive processes is sensed and perceived in the body and mind – positively or negatively – about something distant or yet to happen.” †

HMI scientists and others in recent decades have expanded the long-held definition of intuition to include not only the mind, but also the entire psychophysiological system, especially the human heart. HMI’s findings indicate the heart is an integral part of the intuitive process.

The institute’s research has concluded that the heart receives intuitive information faster than the brain, by a second or more, adding further evidence of a heart brain, a concept that is widely accepted today.

HMI’s Developing Your Intuition article on its Web site goes into greater detail on the heart’s role in intuition and the benefits of using your intuition:

“It has been established that the heart has a powerful electromagnetic field and its own complex nervous system and circuitry that generates up to an estimated 60 times the electrical amplitude of the brain.” The electromagnetic signal our heart rhythms produce actually can be measured in the brain waves of people around us.

“It is no wonder that the findings by researchers at HeartMath and elsewhere conclude the heart has its own organized intelligence network enabling it to act independently, learn, remember and produce feelings – all attributes which, until recently, were nearly universally held to be solely in the brain’s dominion.”

McCraty explained that a major concern and goal of the Stability of Pre-Stimulus Intuition Response study was “the degree to which a nonlocal intuitive response, as detected by electrophysiological measures, remains stable over time. It is important to establish the session-to-session variability in order to determine if intuition can be increased through training and if factors such as baseline affective state, environmental conditions, socioemotional fields, etc., can affect intuitive ability.”

“The results across … (a selected grouping of consecutive) sessions show that some, but not all participants maintained relatively consistent pre-stimulus response patterns across the trials. This is an important finding since there is some evidence from prior research that repeated trials involving nonlocal information/interaction tend to produce a decline in the effect observed. The relatively stable results (in this study) suggest that the protocol is a reliable means of prompting physiological detection of intuitive effects and can be used in future studies investigating different aspects of intuition.”

Additionally, McCraty noted, “The findings that the HRV win/loss response during both the pre-bet and post-bet segments, during the full-moon phase, but not the new-moon phase, are intriguing and worthy of additional study.”