The following article is about the compassionate care Majd Kam-Almaz and his staff are providing to Syrian refugees in Lebanon. More than 1 million Syrian men, women and children have fled to Lebanon alone in the last five years.

After civil war erupted in Syria in spring 2011, HeartMath trainer Majd Kam-Almaz visited the region to investigate the welfare of people fleeing the country. It was familiar territory because he had previously worked with refugees in Bosnia, Kosovo, Tunisia and Greece.

“I made several visits to different countries – Turkey, Lebanon and Jordan – to check on the condition of refugees,” Kam-Almaz said in a recent telephone interview. “I conducted several training programs in these areas, and I’ve studied where the most need is. I realized really that Lebanon has the most need … and most of the refugees have witnessed atrocities before fleeing their homes, or having their homes destroyed.”

Today Kam-Almaz is focused solely on providing HeartMath training to refugees in Lebanon, not far from the Syrian border and where he opened two centers in 2012 and a third in 2013. In the three camps, he estimated, “I guess we had about 11,000 individuals.”

Thus far, he and his staff, typically 14 or 15 in each center, have conducted an estimated 50,000 needs assessments to determine the nature and level of intervention needed. 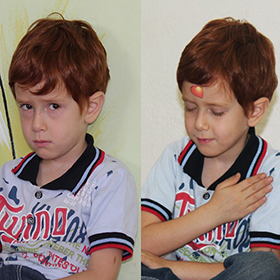 “One aspect of our approach,” Kam-Almaz said, “was to do a (psychosocial) assessment of need, a field assessment. We do it in the refugee camps, at homes – every single home that has a refugee family. And we do assessments on the children, as well as the adults and everyone in the family.”

He and others working with him realized during the first three months of these assessments that “a large percentage of children were having difficulty with urinary control, he said.

This problem proved as pervasive as any among all of the refugees in the three camps. The urinary problems, especially bed-wetting, resulting from traumatic experiences, were affecting entire families living in tents. At that time, tents were housing 10 or so family members, he said.

“So, from that time, we decided to go ahead and conduct a program to deal with this issue,” Majd-Almaz said in the interview, which he gave while riding on a bus in Texas with family members during a two-week visit, after which he returned to Lebanon.

He and trained professionals and facilitators focused on the children’s emotional well-being using HeartMath’s Early HeartSmarts program. “We’ve found that to be extremely effective in teaching the children the difference between fear, security, sadness, anxiety – all the different emotions.”

Training also included deep muscle relaxation, he said, “and we also had in parallel, teaching the mothers about our approach with the children, so they all become a social support for their children. Our success now is, 85% of the children have completely stopped having urinary issues.”

Because of the huge number of refugees in the camps, Kam-Almaz said he, and the others try to work with children and adults in small groups of five to 10. “But some children (and adults) require individual sessions because of the enormity of their exposure, or the level of trauma they experienced. We have individual professionals working with them on a one-to-one basis.” 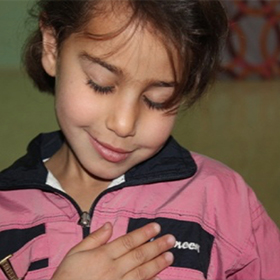 In the children’s group sessions, they work a lot on clarifying emotions, the facial changes associated with different emotions and the behavior associated with various emotions. Then, with whatever emotion they are addressing, they have the children stop, check what is happening inside when they feel the emotion and “warm their hearts, change the emotion.”

So far this has been a successful approach, Kam-Almaz said, interjecting that he wanted to send “enormous amounts of pictures of children with beautiful smiles, inner-peace smiles, that cannot (occur) without children being connected to their heart and feeling the ease and the peacefulness within their heart.”

“We also applied the HeartMath tools (and emWave technology) for women who have difficulties managing their own emotions, Kam-Almaz said, “an inability to deal with the anxiety of losing family members, loss of homes, being refugees and who have had a lot of traumatic experiences, losing family members violently.

“We have found very good results in assisting these women, mothers, back to their abilities of self-care and self-value, and all the necessary conditions that would help them improve their quality of life, as well as the lives of the people they take care of.”

Additionally, he said, “We emphasize (the mothers’ need) for their personal value, for regaining their personal value, their personal health and personal welfare. We found that most, almost 67% of refugees are female, and only 33% are male …. so there’s really quite a bit of pressure on women, and females in general, to manage life, their own lives as well as the lives of others.”

The men Kam-Almaz and his staff work with include especially those who have been incarcerated, he said. “These have had the worst (trauma). They’ve been tortured. They have very severe problems.”

He said the initial group session with men, also typically five to 10 in a group, focuses on developing trust and cohesion among group members. The HeartMath approach of eliciting a quieting response and initial peace is used at the start. Eventually, they discuss the sympathetic, parasympathetic nervous-system response in relation to flashbacks they may have or events they experienced and memories of those events. They talk about how a HeartMath approach could ease their emotional responses to flashbacks and traumatic memories.

And they discuss heart intelligence, Kam-Almaz said. At one point he interrupted the conversation to explain something he said was very important in this part of the world.

“The issue of the heart, as you might know … is paramount in the Middle East culture. The heart and emotion are something very dear to them, but it’s not been explored or utilized as it is utilized by HeartMath. It was simply a philosophical or a socially based concept.”

Before going to Lebanon, Majd Kam-Almaz had been working in a similar vein in United Arab Emirates. He gave up his work there to concentrate exclusively on working with refuges in Lebanon, where he anticipated spending the next five to 10 years providing HeartMath training.

Please join us us in adding heart to Syrian refugees and others that are displace, #addheart.