The Impact of Magnetic Pulsations on Humans and Animals

The Impact of Magnetic Pulsations on Humans and Animals

The Magnetic Sense of Animals

As many of you may be aware, a large variety of animals possess a “magnetic sense.”

However, researchers have found that each of these animals have deposits of biological magnetite in their nervous systems. Magnetite is a small magnetic mineral. The presence of magnetite is not a definite evidence for the perception of the earth’s magnetic field. However, these magnet-like minerals align themselves with the magnetic fields of the earth and might act like microscopic compass needles.

Migratory birds use magnetic clues to guide their journey during migration. When birds migrate over long distances they usually end up in the same place, year after year. One of the first concrete signs that animals can tap into the magnetic field was observed by chance in the fall of 1957 as Hans Fromme, a researcher at the Frankfurt Zoological Institute in Germany, noticed that several European robins he kept in a cage were becoming restless and were fluttering up into the southwestern part of the cage. A paper published in Nature in 2004 reported, “Resonance effects indicate a radical-pair mechanism for avian magnetic compass,” suggesting that birds “see” the earth’s magnetic field with their eyes, where receptors sensitive to magnetic fields feed data to the brain through the optic nerves.

Also marine animals, like salmon, whales and turtles to name only a few, are known to migrate with the seasons, and studies of turtles reveal that hatchlings have the ability to sense the direction and strength of the earth’s magnetic field, which they use for navigating along their regular migration route (Triverdi, 2001). 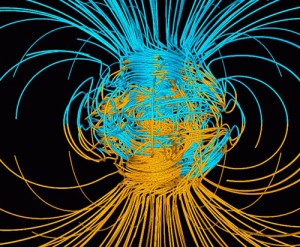 However, even animals not known for their migration habits display a magnetic sense, also called magnetoreception. Recent publications from a German research group (Begall et al, 2008), made the discovery that cattle (and other herd animals, such as red and roe deer) tend to situate themselves on a magnetic North-South axis, as if involuntarily directed by the earth’s magnetic field. These surprising results were discovered when satellite images provided by Google Earth were used to analyze herding patterns and behavior. However, the built-in magnetic compass gets out of alignment the closer the cattle get to high voltage power lines, and the cattle then align with the power lines instead.

But what about humans? Dr. Kirschvink of the California Institute of Technology detected magnetite in the human brain and heart. Some people report that they can sense magnetic North, however, it is not clear if the magnetite helps the orientation sense of all humans. It has been speculated that maintaining a symmetric position to the earth’s field lines somehow influences certain physiological processes. For example, the onset of rapid eye movement in sleeping humans is shortened in the E-W orientation of sleepers compared to the N-S position (Ruhenstroth-Bauer et al.,1987).

Not only is there a fascinating connection between mammal and human magnetic sense, but also processes in the magnetosphere and solar wind produce magnetic waves which influence us.

The presence of Ultra Low Frequencies (ULF) has already been mentioned in previous commentaries. The GCI team is pleased to now have the ability see these ULF waves (also called geomagnetic pulsations) in the spectrogram data we are recording due to the new magnetometers we are using. These waves overlap closely with the frequencies of the heart, while Schumann resonances overlap with the frequencies of the brain waves. (To see the Live Data, Click here).

Ultra Low Frequency (ULF) waves on the Earth are produced by processes occurring in the magnetosphere and by the solar wind. Some of these waves originate as far away as the Sun and are carried by the solar wind, while other sources are much closer to Earth. There are many sources of these waves, both external and internal to the earth’s magnetosphere. ULF waves are created by a variety of processes in magnetized plasma. Plasma is the name given to ionized gases (see “Plasma Sheet”, in the figure below) which is formed by the earth’s magnetic field.

In a magnetized plasma at ULF frequencies there are three wave modes and a variety of names used to describe each mode. Any force that moves the ions also moves the magnetic field (and vice versa). Hannes Alfven was the first person to describe the process that creates a low frequency wave which propagates along the magnetic field lines, for which he received a Nobel Prize for his discovery in 1970. Hence, this wave is named after him. However, the Alfven wave is only one type of wave which can propagate in plasma. In addition, a gas (such as the ionosphere) also supports sound or pressure waves which travel through the density the gas provides. 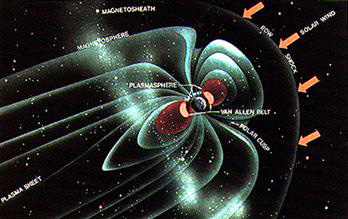 The nonspherical shape is due to the solar wind. The surface facing to the sun is flattened; while the surface facing away from the sun has a tail, also called the magnetotail. Courtesy NASA

There are also other sources causing variations in the earth’s steady magnetic field. Waves originating in the outer regions of the magnetic field propagate along the fields and reach the earth’s surface where they can be measured. On reaching the earth’s surface they cause minute oscillations in the magnetic field, and are therefore often called micropulsations. Magnetic pulsations have been classified into two types:pulsations continuous (Pc) and pulsations irregular (Pi). Because the frequencies are so low, they are usually characterized by their period of oscillation or the time it takes them to complete one cycle (periods from 1 to 1,000 seconds), rather then by their frequency as expressed in the number of cycles occurring in a second. There are a variety of interesting mechanisms that produce such low frequency waves. One mechanism is the resonant oscillation of the earth’s main magnetic field in response to interactions with the solar wind. In simple words, we can imagine a wave travelling along a stretched string. The magnetic field line tension is analogous to string tension, and when the magnetic field is “plucked” by a perturbation, the disturbance propagates along the field line.

Visible phenomena from the collision of charged solar particles with the earth’s magnetosphere are called auroras, or the northern and southern polar lights. Courtesy NASA.

In summary, the ULF waves seen on Earth contain information on about the processes that created them and the regions through which they have traveled. Each type of magnetic pulsation is further subdivided into frequency bands or ranges that roughly correspond to the specific phenomena that created them (Jacobs et al, 1964).

The first class of pulsations is characterized by their irregular form and is divided into two sub-groups, depending on their period (figure 1).

The second class, known as Pc, covers the whole range of pulsations with periods from 0.2 to 600 s (figure 2). On the spectrogram, these resonant or continuous magnetic waves can be seen between 0.001Hz and 5 Hz (see green arrow in figure 3 below). A segment of Pc-1 frequencies can be seen in figure 4 in the range of 0.2-5Hz. The Pc1 waves are often created as the solar wind compresses the magnetosphere facing the sun. They then move towards the ionosphere along the magnetic field lines, interact with the ions and fields they encounter and finally end up being measured on the ground, (which was first observed by Sucksdorff in 1936).

The Impact of Pc Frequencies On Humans and Animals

Scientific research has reported that an increase in Pc-1 frequencies can affect the human cardiovascular system because Pc-1 frequencies are in a comparable range with those of the human heartbeat and rhythms (Kleimenova et al., 2007).

A study carried out in India on animals and humans also demonstrated that humans and animals can be affected by Pc frequencies (Subrahmanyam et al., 1985). The experiments on the animals showed changes in the electrophysiological, neurochemical and biochemical parameters. The following results were observed:

Obviously, the geographic location will impact the experience of humans and animals, when exposed to the magnetic waves in the Pc-1 range and more experimentation is required to study the effects at different geographical locations.

Subrahmanyam et al., 1985, found, that yoga practitioners were able to better remain in balance when subjected to stress generating fields. Almost two decades of stress research carried out by the HeartMath Institute also provides evidence that humans are better able to adjust to stress when trained in heart coherence. The advantage of heart coherence is that even for people with very little time to spare, a few minutes of daily heart coherence practice can help to significantly reduce daily stress.

Much still has to be learned about the processes that generate the Pc waves and the GCI team is continuing to work on observing these waves in regards to our global coherence research.