Most people understand that certain people in our lives can have a profound influence on us: our parents, friends, teachers, co-workers, spiritual and world leaders, philanthropists, musicians and artists among others. There are, however, more subtle interactions between us that also affect us.

Whether it is merely someone sitting beside us, or the person who is in a bad mood that turns a conversation or a party sour, we all are having an effect on one another.

We are learning much more about how and why our presence, and especially our moods and emotions can affect others and how we can sense how others are feeling. Our mere presence can help others feel better and more comfortable, or ill at ease and anxious. Researchers at the HeartMath Institute and other independent researchers using HeartMath techniques and technology have conducted several studies to verify and better understand this phenomenon. Their findings show we not only can affect each other in these subtle ways, but we can do so intentionally.

Here's what independent researcher Steve Morris found when he conducted such an investigation. He wanted to know whether study participants skilled in achieving high states of heart rate variability (HRV) coherence could raise the HRV coherence levels of unskilled participants when in close proximity to them. (Coherence is an optimal state characterized by smooth, or balanced heart rhythms and the harmonious function of the body's mental, emotional and physical systems.) 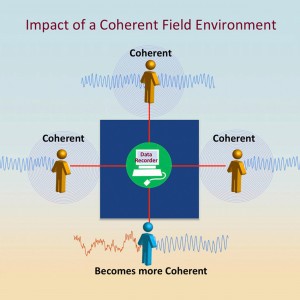 "The HRV of the untrained subject was found to be higher in approximately half of all matched comparisons when the trained participants focused on achieving increased coherence," according to an article Morris wrote about his study. The article, Achieving Collective Coherence: Group Effects on Heart Rate Variability Coherence and Heart Rhythm Synchronization, was published in the July/August 2010 issue of the peer-reviewed journal, Alternative Therapies in Health and Medicine.

HMI has had similar results in what researchers call "energetic experiments":

Are all Things Interconnected?

"Of the many new scientific perspectives that emerged from the 20th century, one of the most profound is that the universe is wholly and enduringly interconnected and coherent. Complex living systems, including human beings, are composed of numerous dynamic, interconnected networks of biological structures and processes."

Those comments, from HeartMath founder Doc Childre and HMI Research Director Rollin McCraty, are from their article, Coherence: Bridging Personal, Social, and Global Health. The article appeared in the July-August 2010 edition of Alternative Therapies in Health and Medicine magazine.

Childre and McCraty make the case that as people increase personal coherence by learning to more consistently "self-regulate their emotions from a more intuitive, intelligent, and balanced inner reference," they affect families, workplaces and the world at large.

"It is postulated that as increasing numbers of people add coherent energy to the global field, it helps strengthen and stabilize mutually beneficial feedback loops among human beings and with the earth itself," they wrote. (Read the abstract or download the complete paper.)

The Quest for Social and Global Coherence

Findings from energetic experiments like those described above have led the Institute of HeartMath and other entities to explore the depth and extent of interconnectedness in our universe.

The Global Coherence Initiative (GCI), established by HMI in 2008, is working on a model in which thousands of skilled coherence practitioners could gradually raise other individuals' coherence levels worldwide. Eventually, intentionally generated coherence will generate a massive collective coherence wave, GCI officials say, ultimately, a more coherent global population could help solve many of society and Earth's greatest problems. GCI is actively engaged in helping to improve society by teaching people the benefits, importance and need for social coherence.