The Connection Between Solar Activity, Volcanic Eruptions and Earthquakes, Weather and Cycles on Earth

Our Mother Earth has been very active since the beginning of the New Year.

Several big earthquakes occurred, starting in Haiti (January 12), followed by Chile (February 27), China (April 15), Taiwan (March 4), and Turkey (March 8), and many smaller earthquakes that had a lesser impact on human life, property and environment (Figure 1: earthquake map for 2010, by USGS). Many wonder if the number of earthquakes is increasing, but scientist say they are not becoming more frequent. 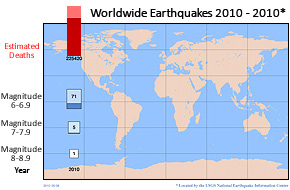 Also, the Icelandic volcano Eyjafalljokull erupted on April 14, forming a massive cloud of volcanic ash (Figure 2) that had an enormous impact on air traffic, with 27 airports closed for many days.

Recent scientific research confirms a connection between high energy charged particles in the ionosphere and earthquakes. A study conducted in 2008 by Jann-Yeng Liu, from the Center for Space and Remote Sensing Research in Chung-Li, Taiwan, examined more than 100 earthquakes with magnitudes of 5.0 or larger in Taiwan over several decades. The results indicate that almost all of the quakes down to a 35 km depth were preceded by distinct electrical disturbances in the ionosphere.

Solar activity is picking up in the current Cycle 24.Presently (May 10), the moderate sunspot 1069 is active. On April 3rd, the largest solar storm of Cycle 24, also called a coronal mass ejection (CME) took place. The solar wind hit Earth on Monday, April 5th and sparked the strongest geomagnetic storm of the year. The event registered a geomagnetic index Kp 7 (on a 0-9 scale, Figure 3). 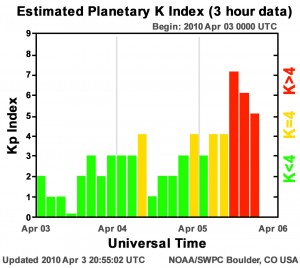 Luckily the storm was not strong enough to interfere with power grids and satellites, but it created auroras in the Polar Regions (Figure 4).

On May 5th another solar eruption came from a spotless region near the sun’s southwestern limb, producing a bright coronal mass ejection (CME) and came to an end on May 9th. Extreme ultraviolet images from the Solar and Heliographic Observatory captured the solar eruption. (Figure 5), current images: (http://sohowww.nascom.nasa.gov).

As discussed in previous commentaries, the solar activity affects the Earth’s magnetic field. Some science is starting to emerge that demonstrates a possible connection between solar activity and Earth events like earthquakes, volcanoes, hurricanes, floods and storms.

Not only is the Earth’s magnetic field affected by the solar activity, so is human health and behavior. Some of the scientific findings are discussed in more detail below.

The electrical currents from the sun also affect the human body’s magnetic field.

The environmental scientist Neil Cherry (2001) reviewed a large number of studies that identified significant physical, biological and health effects that are associated with changes in Solar and Geomagnetic Activity (S-GMA). He suggested that the Schumann Resonances (SR) frequencies that link solar and geomagnetic activity are what link solar activity to the effects on human health and behavior. The SR have ultra low frequency peaks at 7.8Hz, 14, 20, 26, 33, 39, 45, and 51 Hz, which closely overlap with the human brain (also see GCI commentary July 15, 2009).

Everything on Earth is driven by cycles. The “circadian rhythm” is a cycle every living being on Earth experiences, which is a roughly 24 h (daily) cycle (Figure 6). Prof. Franz Halberg of the University of Minnesota and board member of GCI, coined the term circadian and is widely considered the “father of chronobiology”. Chronobiology is the science that examines cycles of living organisms as well as their adaption to solar and lunar related rhythms (Patrick at el., 2003). “Chrono” pertains to time, and biology to living organisms. The 24 h cycle influences biochemical, physiological and behavioral processes.

The connection between the daily (circadian) and seasonal cycles and geomagnetic activity.

Research by Burch et al. (1996) and Rapoport et al. (1998) gives evidence that the melatonin levels are reduced during increased solar and geomagnetic activity. In rats, seasonal melatonin levels were correlated with the seasonal variations in the Earth’s geomagnetic field (Bartsch et al., 1994). Diseases like cancer, neurological disease, acute heart disease and heart attacks are all related to melatonin levels that are too low, as is accelerated aging. In the daily cycle, the blood pressure, heart rate, neurological, cardiopulmonary and reproductive functions are affected.

In addition, clinical measurements have identified significant changes in blood pressure, blood flow, aggregation and coagulation, cardiac arrhythmia and heart rate variability during GMA events; all of these conditions are influenced by melatonin levels. EEG pattern, pulse rate, blood pressure and reaction time were measured in a group of people by Doronin et al., (1998). The authors noted that the oscillations in the Kp index had identical periods in the monitored EEG Alpha-Rhythm. This confirms that whole body changes occur in conjunction with GMA alteration by changing heart and brain patterns.

Neurological Effects correlated to GMA: The brain is a very sensitive electromagnetic organ. The Schumann Resonances appear to interact with the brain, altering the brain waves and neurohormone responses. Geomagnetic storms are strongly related to human health effects and death. Altered EEG rhythms and GMA have been observed by Belov et al. (1998). Strong GMA effects were identified as stressors, while low frequency magnetic oscillations had a sedative effect. A 10 Hz signal stimulates people; while a 3 Hz signal slows them down.

Also memory and attention were correlated to GMA (Tambiev et al., 1995); rats were observed to behave more aggressively during GMA events (St. Pierre and Persinger (1998); GMA and war (Persinger, 1999); crimes and GMA (1-3 days after solar activity). Rajaram and Mitra (1981) found a correlation between patients with seizures in Calcutta and GMA; increase in epileptic experiences during increased GMA; increase in hospitalization for mental disorders, psychiatric admission and suicide; and increase in depression after geomagnetic storm. GMA is also a trigger for migraine attacks. Birth rates were observed to drop and mortality to increase during increased solar and GMA (Zeitseva and Pudovkin, 1995).

We can change the course of planetary events. While solar cycle 24 is becoming more active, affecting all beings on Earth, we can decide on how to react to these changes. It is important to remember that the increasing solar activity has a positive affect – it’s a time when opportunity and creativity can flourish along with increased individual and collective enlightenment. It’s an auspicious opportunity for advancing our intelligence on how to cooperate more harmoniously with each other and with Mother Earth. This can eventually lead to a global consciousness transformation and increasing peace. A few effective co-creative actions we can take through these opportune times would include committing to reducing fear, becoming more responsible for our own energy, and increasing love, care and respect for others and for ourselves. This can do much to restore balance and energetic alignment between Earth and the global community.

Many thanks to all who are caring and holding the vision of humanity in the state of joy, love, peace and health and a vision of a vibrant Earth. I would like to end this commentary with a quote by Albert Einstein:

“Our task must be to free ourselves – by widening our circle of compassion to embrace all living creatures and the whole of nature and its beauty.”