Properties of Water – Does Water Have Memory or Consciousness?

First of all, thank you to the growing GCI community of over 47,000 ambassadors for your ongoing support in our endeavor to bring more peace and harmony to the world.

In this commentary, I will discuss some of the amazing properties of water. As Leonardo DaVinci said,”Water is the driving force of all nature.”

A water molecule contains two hydrogen (H) atoms and one oxygen atom (O), which are connected with covalent bonds as shown in Figure 1.

Water has unusual properties in that it can occur in a liquid, solid (ice) or gaseous (vapor) state. Water is essential for all life on Earth. We drink it and we bathe and swim in it. We use water for cleaning and our gardens, and we use it for agriculture and industrial purposes as well.

Seventy percent of Earth’s surface is covered by water. The percentage of water on Earth is similar to the percentage of water in the human body: 55% to 78%. Scientists are searching for the secrets of this amazing element. There can be no life, as we know it, without water. Water has not been discovered in liquid form on other planets, though there is evidence of traces of it in frozen form on some planets. No substance in the world is more yielding than water, and yet when it flows in streams and freezes and thaws, it erodes rocks, mountains, landscapes, etc.

About 96.5% of Earth’s water is in the form of saltwater in the oceans; 1.7% is groundwater; 1.7% is water contained in glaciers and icecaps in Antarctica and Greenland; a small fraction is found elsewhere; and 0.001% is in the atmosphere in the form of vapor, clouds and precipitation. See Figure 2, below. 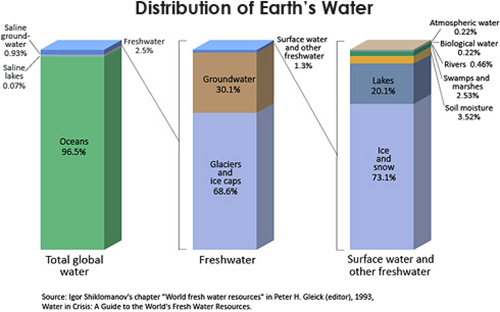 Distribution of Earth’s Water (from USGS). Approximately 70% of the fresh water used by humans goes to agriculture. Water moves continually through the hydrological cycle of evaporation, condensation, precipitation and runoff, reaching streams and the sea. Source: http://ga.water.usgs.gov/edu/waterdistribution.html.

Water memory is what some theorize as the ability of water to retain “memory” of substances previously dissolved in it, even when there is a very high dilution factor to the point that no molecule of the substance remains in the solution.

The research and controversy surrounding this concept is interesting. Samuel Hahnemann, a German physician and originator of homeopathy, had the idea that a substance that causes the symptoms of a disease in healthy people will cure that disease in sick people (Hahnemann, 1833). Most scientific evidence in modern medicine does not support this contention, and there is strong criticism from skeptics whenever someone comes up with supporting evidence for homeopathy. Well known French immunologist Jacques Benveniste sought to prove that homeopathy works. In a 1988 study, he conducted an experiment and co-authored a paper along with others from laboratories in Canada, Italy, Israel, and France. (Davenas et al., 1988) Benveniste concluded in the paper, which was published in the journal, Nature, that the configuration of molecules in water was biologically active, and a journalist coined the term water memory for the hypothesis that water can retain memory.

After the article was published, a follow-up investigation was set up by a team of skeptics, including physicist and Nature editor John Maddox. The team wasn’t able to reproduce Benveniste’s results, and the study was dismissed as not replicable. More recently, French virologist Luc Montagnier, winner of a Nobel Prize for his co-discovery of the link between HIV and AIDs, presented a quasi-homeopathic method in 2009. He also suggested that water could retain electrochemical properties even when the solution was massively diluted. The contentions of Montagnier, a professor at Shangai Jiaotong University in China, again shocked the scientific community and were met with much disbelief.

Whether pioneers like Benveniste and Montagnier will be proven right or wrong remains to be seen. No matter how scientific or pseudo-scientific water research is, water nevertheless continues to fascinate many people. For example, the work of Japanese author Masaru Emoto, who contends that human consciousness has an effect on the molecular structure of water, became known for his beautiful pictures of water crystals. Initially, Emoto said high-quality water forms beautiful and intricate crystals, while low-quality water has difficulty forming crystals. (See Emoto’s photographed water crystals on his website at www.masaru-emoto.net, and a YouTube video about water and consciousness at http://youtu.be/tAvzsjcBtx8.)

According to Emoto, an ice crystal of distilled water exhibits a basic hexagonal structure with no intricate branching. Emoto says positive changes to water crystals can be achieved through prayer, music or by attaching written words of gratitude, appreciation and love to a container of water. Critics have remarked that Emoto’s research had insufficient experimental controls and his experiments’ designs could have been influenced by human error. Emoto has acknowledged that he is not a scientist and that photographers were instructed to select the most pleasing photographs for the experiments.

The World in a Drop

Professor Bernd Kröplin at the Aerospace Institute in Stuttgart, Germany discovered a simple way of making the structure of water visible: Apply drops of water to slides and look at them under a dark field microscope. He showed that while individual drops made by different students were different from each other, drops made by the same student repeatedly showed a similar image in the dried water drop. (For more information, visit Kröplin‘s website at www.weltimtropfen.de/forschung.html, and watch a YouTube video at http://youtu.be/ILSyt_Hhbjg.

Kröplin showed that an image of a flower and an image of salad remained in the water, after a flower or salad was immersed in the water. He apparently has taken the science of water memory a step further, but this kind of work is still regarded as pseudoscience by mainstream scientists.

Professor Konstantin Korotkov, a Russian scientist, also is involved in innovative water research. Korotkov developed a new approach for remote detection of individual and human emotions (Korotkov et al., 2008) by adding a new antenna device to the electrophotonic image gas discharge visualization camera system (GVD). On Aug. 3, 2008, Emoto conducted a ceremony for blessing the water of Russia’s Lake Baikal, the world’s deepest and oldest freshwater lake. GVD sensors were used to measure any changes during the ceremony. The data showed distinct differences at various stages of the ceremony. (From the report, Baikal Water Ceremony, Konstantin Korotkov, 2008):

Tests were conducted in a 2008 experiment in Russia in which ordinary water was exposed to the “NASA sound of the sun,” and then cryogenically flash-frozen, photographed and examined under a dark field microscope. Author David Sereda and Saida Medvedeva, who produced the film, Water – the Great Mystery, took a photograph of an ice crystal that had been exposed to the sound of a solar flare.

You can listen to an interview with Sereda at http://youtu.be/AoJNvjXDaXU.

Additionally, Sereda and Medvedeva tested how the sound of the sun affected test subjects who were wired to a GDV camera, which can monitor the energy radiating from a person’s fingertips. When a subject heard the sound of the sun for one minute, there was an increase in the patterns of energy which indicate there was an increase in the energy radiating from that person’s heart. In other words, the sun was activating the human heart field.

The Global Coherence Initiative previously has reported that solar flares seem to be related to negative and positive emotional peaks in humans. Bursts of creativity and scientific and societal progress have been linked to the increased energy influx from solar flares. Just as the sun can change water, it is possible that the increased energy from solar flares may help people purge the old and experience positive changes. The sun was very active in July and early August in 2012 and produced numerous M-Class (medium size) and X-Class (large) flares. The strongest solar flare the sun emitted, a large X1.4-Class flare, caused a vivid aurora borealis in the more northern latitudes. It is predicted that solar flares will continue to increase in intensity and appearance with a maximum of about 60 sunspots in the spring of 2013, which is the time when a solar maximum currently is predicted to occur. (See NASA’s prediction of monthly sunspot numbers in Figure 4 below.) 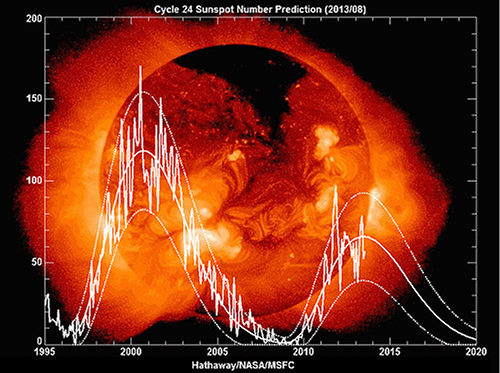 During the ongoing solar energy influx through 2013 and beyond, there may be occasions when people feel unusually tired or experience emotions such as anger, irritation or depression. Remember that during difficult times, solar energy may be helping to move old energies out of your system. By remaining calm and centered, you can use any incoming energy to your advantage. Feel free to use HeartMath’s Quick Coherence® Technique or other tools, which can help you create more coherence in your life.