Research team is wishing all members a Happy New Year and we want to thank our Compassion Operatives (over 29,000), for being part of GCI and for contributing to creating increased peace and harmony on Earth. May 2011 bring many positive changes to you and your loved ones.

As discussed in previous commentaries, the sun and other planetary influences can affect human health and well-being and they can also trigger other processes on Earth. The solar cycle 24 is picking up in activity and the sun is regularly spewing out solar flares. The last one emerged on January 20th, producing several solar flare C-class events, which were not directed at Earth.

However, the moon also has an influence on life and Earth processes. The winter solstice on Dec. 21, 2010 coincided with a lunar eclipse. NASA states on its website that the last time a lunar eclipse occurred during a solstice was in 1991 and won’t happen again until 2094. The next total lunar eclipse that can be seen in North America will occur April 15, 2014.

A lunar eclipse turns the silvery moon a yellow, orange or reddish color, because the earth blocks part of the rays of sunlight from reaching the moon. A total lunar eclipse is so beautiful, because Earth’s atmosphere is filtering and refracting out the blue colored light, and depending on the amount of particles in the atmosphere, the moon can have different colorings. (For more information: http://eclipse.gsfc.nasa.gov/SEsaros/SEsaros151.html, photo above is from the NASA website, by Fred Espenak).

Human behavior and the moon phases:

The notion that the phases of the moon can influence human behavior is ancient, and is reflected in the origins of the word “lunacy” (luna = moon). An excerpt from Wikipedia on the origin of the word “lunatic” states: “The word lunatic is borrowed from the Latin ‘lunacus’, in turn stemming from ‘luna’ (moon), and denotes the traditional link made in folklore between madness and the phases of the moon.” The authors Owens and McGowan report in an article (The German Journal of Psychiatry, 2006) that a high proportion of health professionals continue to hold the belief that the moon can in some way influence human behavior. Angus (1995, unpublished MSc study) reports that 43% of healthcare professionals believe the lunar cycle influences human behavior. A study with the title “Lunacy” by Danzl, published in the Journal of Emergency Medicine in 1987 found that 80% of emergency room nurses and 64% of physicians agree that the moon affects their patients’ behavior. A Russian study (Lucatelli and Pane, Biofizika, 1995) found that in some cases of manic-depressive illness, “Planetary locations in relation to the lunar month could be correlated with the susceptibility to bipolar manic-depressive syndrome.” Also, the crime rate has been reported to be much higher during the full moon then during other days (Thakur and Sharma, 1984, Br Med J (Clin Res Ed)). Another example is many women report they have menstrual cycles similar to the moon cycle. However, Owens and McGowan (2006) come to the conclusion: “While a lunar effect on human behavior is a phenomenon which is accepted among health care professionals, the majority of contemporary published literature rejects the influence of the lunar cycle.” This statement could change or be further confirmed with new data or different ways to analyze the data. Human beings consist of over 70% water and, like the ocean’s tides, the fluids in our body might be influenced and influencing us in ways we may not be fully aware of or able to prove. This might contribute to the ambiguous scientific studies available to date. Author and psychiatrist, Arnold Lieber, theorized that since humans are composed mostly of water (like the earth), our bodies might have “biological tides” that influence our emotions. He even wrote a book about it called How the Moon Affects You (1996).

Does the lunar cycle influence Earth?

Most people are familiar with the fact that the moon causes the tides in the earth’s oceans. This is because of the gravity forces between Earth and moon. Does the moon also trigger movement in the earth’s crust, which could lead to earthquakes? Many scientists working on plate tectonics dismiss lunar effects as triggers of earthquakes (Kokus, 1987, Cycles); however, some research has been carried out to study the influence of the moon in earthquakes. Kokus and Ritter (1988, Cycles) studied lunar phase triggers in 21 earthquakes. 14 occurred at the quarter phase, five at the full moon and two followed an eclipse. Some scientists claim that the lunar effect is gravitational, i.e. tidal (Ferulano, 1986, Hartzell and Heaton, 1989). A study of 2000 earthquakes demonstrated that they occurred when tidal forces where over the epicenter of the earthquake (Stetson, 1935). While the gravitational effect should be too weak to cause an earthquake, many studies show that there seems to be a lunar trigger. Herman and Goldberg (1978) state that the moon triggers particle flow which disturbs the earth’s magnetic field.

The effect of Lunar Eclipses on Earth

Eclipses are known to have an effect on the conductivity of the atmosphere, especially the E-region, which in turn affects the earth’s magnetic field (Bown, 1991). Stening (1989) states the largest effects of lunar tides on the geomagnetic field occur in the morning around the time of equinoxes. Though it seems that a lunar trigger is apparent, geophysicists nevertheless argue that the underlying processes remain obscure and, as discussed in previous commentaries, a solar linkage and possibly other factors also have to be considered.

Mitch Battors from “Earth Changes Media” made the statement in his Dec. 20, 2010 newsletter that earthquakes occurred within two weeks prior and/or two weeks after the last six full lunar eclipses. His speculation was correct that an earthquake would follow the lunar eclipse on Dec. 21, 2010. A 7.4 earthquake occurred on the same day of the eclipse in Japan (see table below).

Pachinyk, (2002) discusses that peaks in earthquakes around equinoxes and solstices also reveal solar linkage and that evidence indicates that there is an interaction between gravitational and electromagnetic fields.

GCI data and the lunar cycle

As many of you know, the Global Coherence Monitoring System is using a magnetometer which monitors the magnetic frequencies in the ionosphere. Also, the HMI research team is hosting a Random Number Generator (RNG), which is part of the worldwide network of Random Number Generators maintained by the Global Consciousness Project (GCP). Looking at the data of the RNG located at our research facilities over a ten year period (see figure below), the lunar cycle is also reflected in the data. There was a significantly higher effect during the full moon phase.

GCI started a monthly Full Moon Synchronized Care Focus for GCI Ambassadors during the December 2010 full moon. Many other groups are also using the energy of the full moon to help uplift the collective frequencies of humanity. We have not analyzed the full moon data of our magnetometer over a long period of time, but we hope to soon be able to uncover information on the possible effects of the full moon during the synchronized global Care Focuses and meditations. 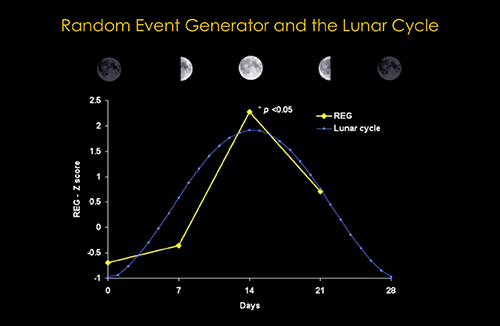 It can sometimes be difficult to prove complex interactions between the sun, earth and moon and other planetary influences which have not been discussed here. Even if the science is ambiguous, we can still see that there is an interconnection between, the moon, life on Earth, the sun and the universe.

As lunar phases continue and solar activity keeps picking up over the next few years, more changes can occur in our lives which at times can feel challenging. In those times, it is important to remember how we can increase our own heart coherence, which is beneficial not only to ourselves but also to our social and global environment. We invite you to join us in GCI’s Global Care Room for Care Focuses and our monthly Full Moon Synchronized Care Focus, as well as follow your own personal practices to increase care and compassion for yourself and others.

I would like to end the commentary with the words of Henry David Thoreau:

"I know of no more encouraging fact than the unquestionable ability of man to elevate his life by conscious endeavor."