Interconnection Between the Sun and the Earth

Because of Compassion Operatives’ many questions, I will cover some of the basics of the science behind the Global Coherence Initiative in the first few GCI commentaries. This will include sun-earth interactions and the ionosphere and how they affect our health and well-being. I will also explain how the magnetometers at our sensor sites work.

There is a strong connection between the sun and Earth. A rotating molten-iron core in the earth generates a magnetic field that has fluctuated throughout history. The strength of Earth’s magnetic field has been decreasing steadily, at a rate of about 5% per century, since we began measuring it in the mid-1800s.

The sun has an 11-year cycle in which its magnetic field changes dramatically. Especially during the solar maximum, sun spots and solar flares that form eject powerful bursts of matter and energy into the solar system. Earth is surrounded by a bubble of air, reaching 350 miles into space, and within it lies the ionosphere, which GCI monitors at sensor sites. The solar wind interacts with Earth’s magnetic field by flattening the magnetic field on the sunward side and stretching it out on the downwind side, causing a so-called “magnetotail” (see image by NASA). The solar wind varies over periods as short as seconds. When solar blasts, and their associated magnetic field, reach Earth’s magnetosphere, highly energized particles can be extracted from the solar wind into the magnetosphere, producing auroras and causing a geomagnetic storm, which in turn creates magnetic-field variations and affects whatever lies within it. 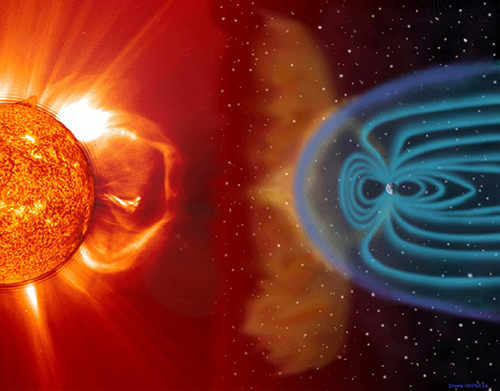 When Earth’s orbit and solar flares intersect, many disruptions are experienced in radio communication, satellites, climate and our bodies. Life and the electrical potential of Earth vary with solar activity. In turn, alternating electrical fields, like those generated by geomagnetic storms, change bioelectricity, animals’ rhythms and blood dynamics.

Solar activity, geomagnetic activity and weather are correlated to changes in blood pressure, blood composition and the physical and chemical state of humans, causing higher rates of depression, heart attacks and deaths. This is reflected not only in individual and group biologic and emotional systems, but in natural, social and political systems as well.

Also, human aggression, as seen in national and international conflicts, terrorist attacks and wars, occur in cycles that can be linked to solar and geomagnetic activity. (More about social influences will be presented in an upcoming GCI report.)

Findings include the following:

To better describe the sun-Earth interaction, Mitch Battros, a science writer, came up with following equation for the relationship between the sun and the earth:

Solar cycle 24 has begun and it has been predicted by the National Aeronautics and Space Administration (NASA), European Space Agency (ESA) and National Oceanic and Atmospheric Administration (NOAA) that it will be up to 50% stronger than its record-breaking predecessor, Solar cycle 23. The sun is predicted to reach its apex, or maximum (of activity) in late 2011 into 2012. What might this increased activity hold in store for us?

Variations in Earth’s magnetic field are measured by magnetometers. For the Global Coherence Initiative, HMI engineers have built a magnetometer nicknamed “Maggie,” which is located in Boulder Creek, Calif. The GCI is establishing a network of global sensor sites to study these and related phenomena and to expand the dimensions of its research on emotional physiology, heart-brain interactions and the physiology of optimal health and performance. The function of this network is to investigate the relationship between the magnetic forces in the earth and ionosphere, as well as other more established measures of solar/geomagnetic activity and human biologic systems.

This Global Coherence Monitoring System will utilize a network of 12 sensor sites strategically placed around the world. Each site will include an ultrasensitive magnetic field detector to detect ionospheric disturbances and resonances, a geomagnetic static field detector and a random number generator (RNG). Data gathered from these detectors will be integrated with NOAA data to provide a picture of the earth’s energetics.

This is all the science behind GCI for this commentary.

Another area to be explored in a future GCI commentaries will be whether we are not only affected by the sun and earth’s geomagnetic activity, but if we as human beings, with our consciousness, might actually cause or influence the sun’s activity?

Edgar Cayce, the famous of the 20th century clairvoyant, once gave a reading about sun spots in which he said:

Sunspots, as well as earth changes, are reflections of our own state of consciousness, a result of our own actions, the boomerang of divine law. Sunspots are reflections of the “turmoil and strife” that we ourselves have created, and our own mind is “the builder.” The responsibility for earth changes lies squarely on our shoulders, and how we conduct our relationships with others has everything to do with the changing face of the earth. Earth changes are “adjustments” that have to be made because something is out of alignment. Just as we create chaotic conditions by our own out-of-alignment behavior, so we can create positive transformation by our loving attitudes and actions.” (Reading #5757-1)

Finally, we’ll explore at greater length the effects of changes in geomagnetism and sun-Earth interactions on natural phenomena such as earthquakes, volcanoes and violent storms in an upcoming commentary.