Influence of Geomagnetism and Schumann Resonances on Human Health and Behavior

In this commentary I would like to focus on this question: Is there a connection between solar activity, geomagnetic storms and the Schumann resonances and human health and behavior?

In the last commentary, I discussed the Schumann resonances. Like a tuning fork, the earth has natural sound frequencies and these are called Schumann resonances. There are about 1000 lightning storms at any given moment worldwide, which excite the cavity. These resonances form in the conductive ionosphere which acts as a wave-guide. The limited dimensions of the earth cause this wave-guide to act as a resonant cavity for electromagnetic (EM) waves in what are extremely low frequencies bands (see figure below). 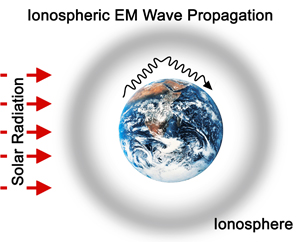 At the time physicist W.O. Schumann published the results of his research about these resonances in the journal Technische Physik, a Dr. Ankermüller, a physician, immediately made the connection between the Schumann resonances and the alpha rhythm of brain waves. He found the thought of the earth having the same natural resonance as the brain very exciting and contacted Professor Schumann, who in turn asked a doctoral candidate to look into this phenomenon. This doctoral candidate was Herbert König, who became Schumann’s successor at Munich University. König demonstrated a correlation between Schumann resonances and brain rhythms. He compared human EEG recordings with the natural electromagnetic fields of the environment (1979) and found that the first five Schumann resonances, 0-35 Hz, to be within the same frequency range as the brain waves in a human EEG and the 7.8 Hz signal to be very close to the brain’s alpha rhythm frequency.

The first five Schumann resonances overlap with the brain frequency bands. Note: Brain waves are grouped according to their frequencies and are labeled with Greek letters. Their most common frequencies include alpha, beta, delta and theta.

Since this first discovery, more scientific research has posited that Schumann resonances are very important electromagnetic standing waves, acting as background frequencies and influencing biological oscillators within the mammalian brain.

As long as the properties of Earth’s electromagnetic cavity remain about the same, these frequencies remain the same. Some of the changes that occur in the Schumann resonances are caused by the solar sunspot cycle as Earth’s ionosphere changes in response to changing solar wind associated with the 11-year cycle of solar activity. As the mean intensity of the Schumann resonances increases or decreases because of day/night differences, changes in solar activity, global weather, etc., our brains and nervous systems respond to the changes.

Resonance may be defined as the frequency at which an object most naturally wants to vibrate. For example: In coherent systems, one object may set another object into motion if it shares the same resonant frequency. If, for example, you strike a tuning fork of 100 cycles per second and bring it near another tuning fork of that same frequency, the second tuning fork will be set in motion. Even though it has not been struck, the second fork will begin to vibrate and radiate a sound merely by being in the same field as the vibrating tuning fork.

Similar to the tuning-fork example, evidence shows it is possible for the brain to detect, tune into and respond to a Schumann resonance signal.

The question arises: How are we able to tune into the Schumann resonances?

The answer is that our brain possesses Zeitgeber, a German word that translates literally to time givers and refers to external agents or events that provide signals – in this case, the Schumann resonances. These external signals help the human biological system to become synchronized with the daily rhythmic cycles of the earth.

Research within the last decade shows that significant alteration in solar and geomagnetic activity caused by such things as geomagnetic storms can precipitate significant changes in the intensity and stability of a Schumann resonance signal. This can take a Schumann resonance signal outside of its normal range and induce alterations in brain and heart synchronization and changes in the brain’s melatonin level.

Some ill effects associated with changes in solar geomagnetic activity:

The effects of manmade electromagnetic fields on human health

The electromagnetic fields generated by power supply systems, telecommunications, appliances, computers and other technology produced by humans are extremely powerful and in some cases have been associated with increased incidence of cancer, heart disease, depression and other diseases. Exposure to strong electromagnetic fields in residential areas and in certain occupations has been documented as significantly increasing the incidence or risk of the listed diseases. Certain groups of people such as the elderly, children, women who are pregnant and the weak have been found to be more sensitive or susceptible to adverse effects from these fields than the rest of the population. (As is often the case with research, there are opposing opinions on the existence or extent of such adverse effects.)

Much more detailed research has been carried out, but it is beyond the scope of this commentary to go into it.

So, in summary, researchers have found evidence indicating that human health and behavior appear to be affected by changes in Schumann resonances. Also, many scientists believe these resonances may be important in human biological cycles.

Possible future considerations for scientists with respect to the Schumann resonances include learning why some people are adversely affected by changes in them, why most people are not and what can be done to help those who are.

In addition to exploring whether mood and health are affected by Schumann resonances, researchers also have studied whether there is a link between historical events such as wars and social unrest with the solar cycle and resulting changes in ionospheric activity. I will write more on this subject in an upcoming commentary.

Allow me to mention two items not directly related to today’s topic:

Remember what Albert Einstein said: “Everything in life is vibration.”