Thank you to all of you for your ongoing support and participation in GCI and our mission to bring more peace and harmony to the world. GCI now has over 50,000 ambassadors, how exciting is this! For many people, 2012 was an incredibly intense year, bringing global changes on all levels: political, societal, economic and environmental. In this commentary, I want to address the ongoing global earth changes, what they mean to us and what we might expect in 2013.

At the World Forum, an international congress on GEOCATACLYSM held in 2011, extensive data from different earth science disciplines were compiled and discussed by various scientists. The goal was to gain a deeper insight into global environmental changes, and their potential impact on civilization. The compiled data indicated that our planet is going through a great transformation. Many scientists realized that the changes not only affect our weather and climate, but they also affect the lithosphere (the ridged, outermost rocky shell of our planet), the hydrosphere (the combined mass of water found on our planet), the atmosphere and the magnetosphere (Earth’s magnetic field).

Prof. Dr. Elchin Khalilov, the Chairman of the World Forum, reported changes in the following areas, and some of the points below are directly quoted from the proceedings:

The explosive, more than fivefold growth of the North Magnetic Pole’s drift rate from 1990 to the present has been accompanied by a significant increase in Earth’s activity.

In 1998, the North Magnetic Pole’s drift rate approached its maximum value. From roughly 1998 on, there has been an observed sharp increase in the number of large earthquakes and earthquake fatalities, volcanic eruptions and tsunamis (catastrophic, medium sized and weak, see Figure 1). 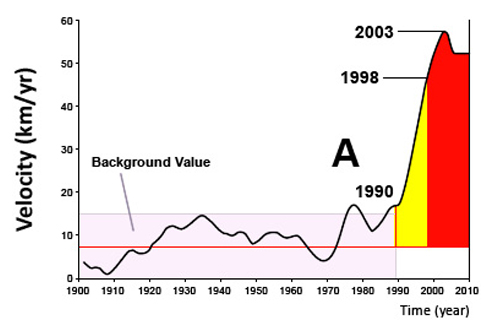 A comparative analysis of variations and the dynamics of numbers of large M> 8 earthquakes between 1980 and May 2010 revealed that starting from 1997-1999, there has been a surge in the number of large earthquakes and fatalities caused by (see Figure 2). 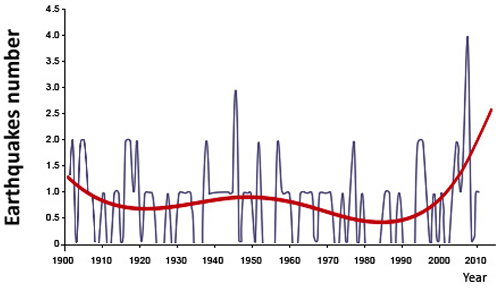 Increase in floods has been observed

Flood statistics from the US in Figure 3 below show a large increase in flood notifications between 2000-2008. In addition, the number of worldwide flood notifications for the period between February 2010 and late May 2010 is more than 2.5 times higher than the figures for the same periods from 2002 to 2006 inclusive. 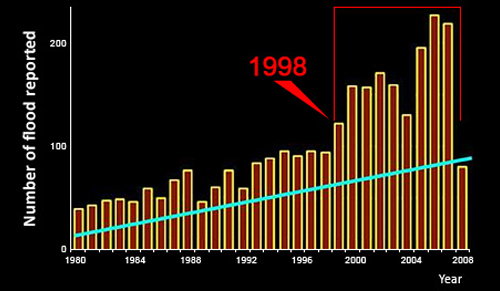 A surge was observed in the number of North Atlantic tropical storms between 1998 and 2007, and this tendency continues today. An increase in the total number of Atlantic Basin hurricanes from 1944 to the present was also observed. A recent super storm that is still alive in our memory is Hurricane Sandy. The dynamics of the annual number of U.S. forest fires from 1960 to 2007 reveals their increasing tendency, with a “surge” beginning in 1998. A similar pattern in the dynamics of forest fire statistics has been observed in other regions of Earth”.

“An important role in climate change is attributed to global changes in the parameters of the geomagnetic field and magnetosphere; this refers in particular to the more than 500% increase in the North Magnetic Pole’s drift rate and reduction of the geomagnetic field intensity. Today, the impact of magnetospheric processes on Earth’s climate is considered a proven scientific fact.”

As previously discussed in GCI commentaries, global climate change is also affected by solar activity and other solar variations, like the flux of solar radiation in particular, which is a proven scientific fact. “As a result of the studies conducted, a conclusion has been drawn about the beginning of the so-called global “energy spike” in our planet’s energy manifesting itself across all its strata: the lithosphere, hydrosphere, atmosphere and magnetosphere. The starting point for the global “energy spike” is roughly 1998. The global “energy spike” is explicitly reflected in the soaring statistical indicators for the vast majority of natural disasters most dangerous to humanity: earthquakes, volcanic eruptions, tsunamis, tornadoes, hurricanes, storms, floods and forest fires.”

In maybe less scientific words, what does this global “energy spike” mean to us? Is the earth evolving to a different state of consciousness or frequency (along with humanity)? Can we learn to live with the earth changes, rather than being threatened by them? In mid-2013, the maximum of the present solar cycle is expected. So, this year we could expect more earth changes.

While we do not know what kind of earth changes to expect, we can take responsibility for our own inner well-being and help create more harmony in our energetic field environment. An example of how heart coherence can positively affect us, can be found in the photographs below.

The first photograph shows a saliva sample from a person in an incoherent state; it doesn’t have any structure and looks like a blob. After five minutes of practicing heart coherence, saliva taken from the same person shows nicely formed crystals. Since we are composed of about 70% water, these saliva samples indicate that what we feel can have an impact on us. 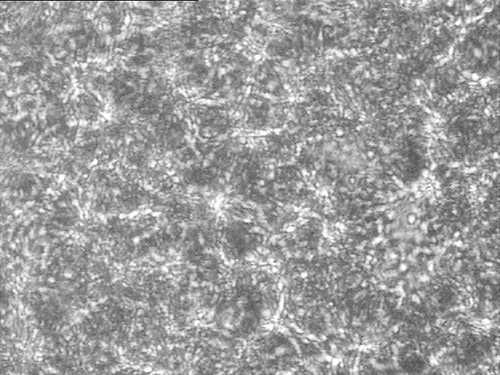 Picture 1. Saliva of person not coherent.

We encourage you to practice heart coherence to increase harmony and well-being throughout 2013.